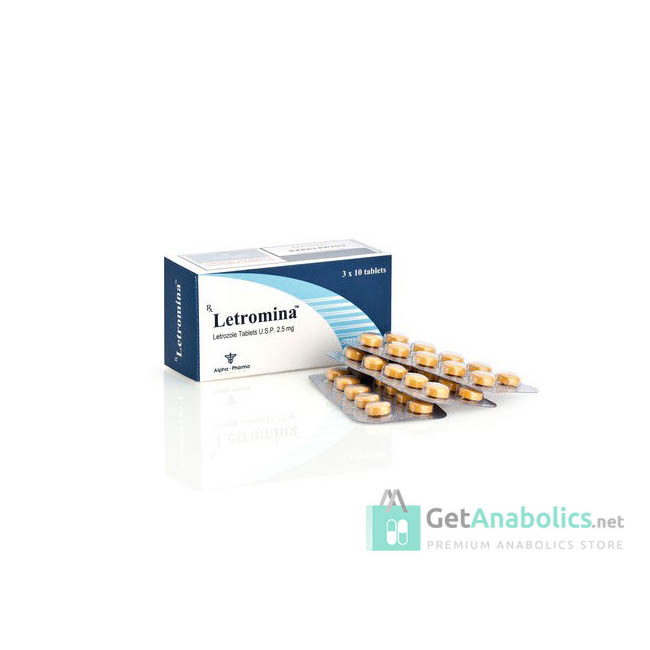 For those who is looking for Letrozole and wondering where to buy Letrozole from Alpha Pharma legaly we offer Letromina as the best choice for real bodybuilders.
From now on a large variety of injectable steroids as well as oral steroids and post cycle therapy from Alpha Pharma can be bought on GetAnabolics. We glad to introduce the new Letrozole from Alpha Pharma.
All the products we have to offer are made of authentic, high quality compounds and have a single goal: to help people gain muscular mass, overall strength, to burn fat and assist them on the path to physical perfection. In order to create a constructive and civilized connection with our customers we will make maximum efforts to assure a high-quality service and will approach every person that address our store with courtesy and respect.
Building and maintaining a gorgeous body require a combination of methods. A proper diet comes first in the list of vital components needed by the body. Secondly, make sure you always buy & use legal steroids online not only to avoid conflict with the law but more importantly, to avoid health complications.
GetAnabolics.Biz is the online steroid supplier specially created and dedicated to provide each athlete and bodybuilder with best anabolic steroids at discount prices. We’ve chosen most reliable brands to collaborate with in order to ensure safe, genuine and top-notch steroids to our customers.
Shipping steroids very safely is the main concern for the delivery of steroids worldwide. Our discreet shipping guarantees that no one else knows that you buy steroids online.

Letrozole is a third generation aromatase inhibitor. Like most aromatase inhibitors it was developed to fight breast cancer by inhibiting aromatization via the aromatase enzyme. It is similar to arimidex, however letrozole is much more potent in it’s ability and is used primarily when other treatments such as selective estrogen receptor modulators have failed to produce results. This is why the majority of the research about letrozole has been conducted on post-menopausal women, but of course some of the findings can be translated over for the benefit of athletes.

In terms of how these effects can be used to the benefit of bodybuilders and strength athletes, letrozole is primarily used to ward any estrogenic side effects caused by the administration of anabolic steroids. Letrozole has been show to have the capability of reducing the level of estrogen in users’ bodies by up to 96-98%. This would seemingly be enough in itself to make the compound a desirable one with which steroid users would be interested in. However letrozole also has been shown to increase the amount of lutenizing hormone, follicle stimulating hormone, and sex hormone binding globulin in users (1). When you combine these attributes with the fact that it will help protect against gynocomastia, water retention and other estrogenic side effects letrozole obviously can fulfill many users’ needs.

There are some animal studies that have suggested that letrozole can help to reduce or even eliminate pre-existing gynocomastia as well (2). Of course there are some limits to this research as it has never been conducted using human subjects but it does demonstrate that there may be a mechanism by which this could occur. Anecdotally some users have reported that they have experienced a reduction in their own pre-existing gynocomastia, but of course these reports have their limits as they were not conducted with the scientific controls in place.

Interestingly, it takes approximately 60 days to get a steady blood plasma level of letrozole once administration of the drug begins (3). This may necessitate that a user begin using the compound prior to beginning their cycle if they wish for the effects to be at full strength once their cycle begins. This may also hinder the ability of the compound to respond quickly if a user begins administration of the drug to counteract some side effects that have appeared quickly.

Anecdotally users have reported seeing good results using doses ranging from about .25mgs per day to .5mgs per day. However these doses do vary quite widely from user to user, including dosing schedules. Some have reported using the compound every other day or every third day with good results. Also, doses reported have ranged from .25mgs to as much as 2.5mgs per day.

Despite this anecdotal evidence it should be noted that doses as low as 100 micrograms can cause the maximum inhibition of the aromatase enzyme. It is therefore advisable that users experiment with their dosages to find what levels can be maintained for the compound to be fully effective, while minimizing side effects. Of course if a user is trying to treat side effects that have already appeared one may want to err on the side of using too much letrozole and face those side effects rather than dealing with something like gynocomastia. However, the severity of the condition will likely determine this in most cases.

The maximum dosage that a user would want to use would be 2.5mgs per day. It has been shown in numerous studies that this dosage will eliminate nearly all of the estrogen in the body in nearly all individuals. Any dose that is higher than this would simply be unneeded.

Despite the ability to increase the amount of lutenizing hormone, follicle stimulating hormone, and sex hormone binding globulin in users letrozole can be counterproductive if used during post-cycle therapy. This is due to the ability of the compound to drive estrogen levels too low during use. Once the compound is discontinued this can result in a “rebound effect” in estrogen levels with these becoming quite high, something that should be avoided during or after post-cycle therapy. Anastrozole could be seen as an alternative to letrozole in this capacity as it seemingly does not have such a potent effect. The detrimental effect that letrozole has on blood lipid levels is another reason why many will avoid it’s use during post-cycle therapy, and this is discussed below.

It should be noted that in theory if one was to consistently suppress your natural estrogen levels for a long period of time, this would negatively impact your health, including your cholesterol. Due to the ability of letrozole to inhibit estrogen so much, this should definitely be a concern to most users. However the research that has focused on the relationship between use of letrozole and cholesterol levels is rather inconsistent in it’s findings. Many studies have concluded that the compound is detrimental to both a user’s HDL and LDL cholesterol levels (4.5,6), while other research has found no link. Obviously individuals are best served to monitor their cholesterol while using any compound via blood tests however barring that, letrozole should simply not be run for extended periods of time if at all possible. Doing so could cause serious medical complications.

Along with the issues related to blood lipids is the fact that many users complain that their libido is dramatically reduced when using the compound. This is related to the fact that estrogen is partly responsible for the regulation of an individual’s sex drive. Since letrozole is so potent it can often drive estrogen levels too low and this inhibits a user’s libido. To avoid this users can lower dosages, but some anecdotally report that even extremely low doses of the drug can cause problems. If this is the case a less potent compound such as exemestane or anastrozole may be a more appropriate option.

CAN I SAVE WEIGHT AFTER A STEROID COURSE?

CREATINE ON A COURSE OF STEROIDS

WHAT SHOULD BE THE DURATION OF THE COURSE OF STEROIDS?

FEATURES OF SHORT COURSES OF STEROIDS